The period before and during the Second World War 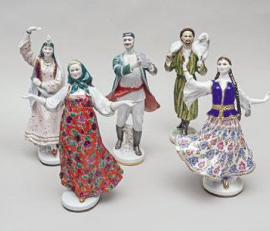 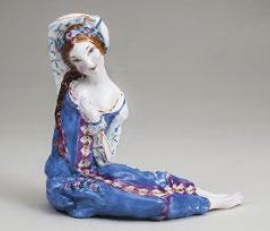 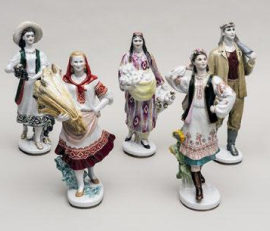 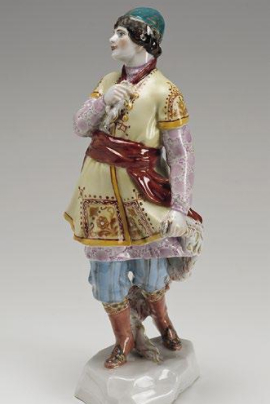 Following industrialization and collectivization carried out in the country, as a result of which, according to the party documents, “a victory of Socialism was ensured in the USSR”, a wide-scale “cultural construction” started in the early thirties. Socialist Realism, practically denying all alternative trends in art and literature, was proclaimed as the only true method to be used by Soviet artists. The Lomonosov Porcelain Factory that had rich cultural traditions and professional personnel came to be regarded as the basis for the creation of a new style consonant with socialist everyday life. In 1931 the country’s first art laboratory was established there. A year later Nikolay Suetin, sent to the factory by the Leningrad Section of the Union of Artists, was put at the head of it. Together with him at the factory worked the young talented artists Ivan Riznich, Alexey Vorobyevsky and Mikhail Mokh, active at the factory since the middle of the 1920s. A group of graduates of the Leningrad College of Industrial Art – Tamara Bespalova, Liudmila Protopopova, Liubov Blak, Lydia Lebedinskaya, Anna Yefimova, Anna Yatskevich and Serafima Yakovleva – joined them to become later legendary masters of Soviet porcelain. These artists treated contemporary themes in porcelain with a  subtle taste and a  classical sense of harmony, be it an allegory of socialist construction in the painting of the service named “From the Taiga to Construction” or the theme of industrial development and glorification of heroic labour, originally dealt in the  “Industrial” and “Metal” Services and the  painted decoration of the Hay-Making vase. The individual manner of Alexey Vorobyevsky took shape and became recognizable almost immediately. This talented artist possessed a striking poetic vision of the world, in which the subtle elegance of the World of Art traditions was harmoniously interwoven with the light spirituality of Russian folk art. Vorobyevsky never made preliminary sketches. He created his fascinating theatrical world directly on a porcelain blank. A festive extravaganza with aerial castles, crystal bridges, gallant ladies and cavaliers was replaced in it by a merry-go-round with horses and cockerels borrowed from popular folk prints. In Vorobyevsky’s enchanting world numerous fairy-tale characters neighbour  with refined and tender ballerinas and white Arctic ice hummocks appear next to the legendary Gardens of Semiramis.
Having once created this charming realm, the artist himself, shrugging his shoulders, used to say: “I don’t invent anything, these are my dreams.” To create new forms of Soviet porcelain, sculptors turned to simple geometrical shapes – sphere, cylinder and ovoid. The principle of simplicity and laconicism corresponded to the creative views of Nikolay Suetin, head of the group, who harmoniously implemented Suprematist ideas in porcelain. He laid the emphasis on the purity and clarity of form, logical integrity of the composition, dynamism and conciseness of painting. In 1933, under Suetin’s supervision, Eva Shtrikker developed the first service shape for a mass-scale Intourist production. A little later Suetin’s Standard and Crocus shapes were created. And the new form, designed in 1936 by the young sculptor Serafima Yakovleva for the Tulip Service, became a classical shape of Soviet porcelain that was invariably present in the factory’s repertory for many years. Pieces of sculpture also reflected themes of contemporary life.
Theatrical theme also received its original development in porcelain sculpture, such as friendly caricatures by the Kukryniksy (popular trio of cartoonists – the artists Mikhail Kupriyanov, Porfiry Krylov and Nikolay Sokolov) depicting such prominent theatrical figures as Stanislavsky, Kachalov,Moskvin, Prokofyev and Meyerhold. In 1936, on the occasion of the adoption of the Stalin Constitution, a small exhibition of works created by the factory’s artists was held in the Kremlin, which enjoyed a general acclaim of the country’s leaders. As a result of this success a decision was taken to increase the production of artistic porcelain nearly fivefold. The head artist Nikolay Suetin learned about this decision in Paris, where the Soviet pavilion was built according to his design at the World Exhibition of 1937, for which he was awarded the Grandprix. The porcelain articles of the factory, represented at this exhibition by works of the last years, received the Gold Medal again.
During the  years of  World War II the  factory did not work. Some of  its departments and the  priceless collection of  museum porcelain wares were evacuated to the  Urals. The territory of the enterprise was used for quartering a military unit. Many employees of the Lomonosov Factory went to the front and to the volunteer corps, the remaining personnel became soldiers of a local anti-aircraft defence detachment.
Leningrad porcelain artists dealt with the theme of war in their works. Shaded windows, half-destroyed buildings, piercing rays of searchlights dissecting the night sky — this is how Leningrad was depicted in 1943 in a service painting by the artist Lydia Libedinskaya. And several years later Alexandra Shchekatkhina-Pototskaya painted on vases the incomparably profound patriotic images of Kuzma Minin and Dmitry Pozharsky, Dmitry Donskoy and Alexander Nevsky. The trials and tribulations of the war years evoked a natural demand of people for true art, forthe beauty of nature, a return to the ideals of human relations.