Soveit period: creation of the best 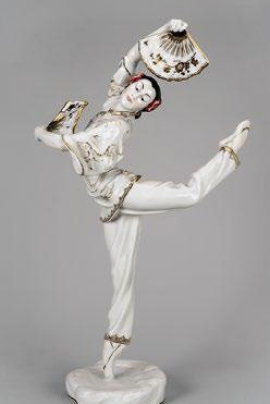 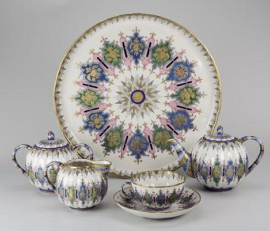 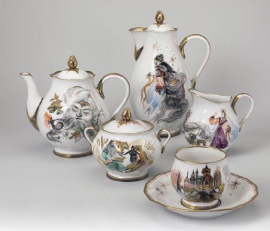 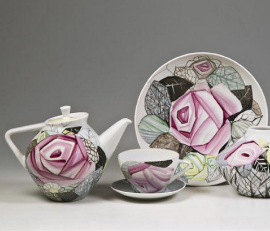 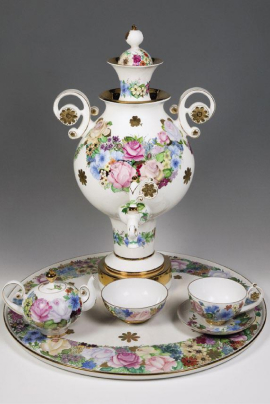 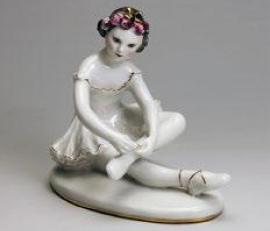 In post-war art, after the asceticism of the blockade years, the overwhelming need for beauty and joy is expressed. In porcelain painting, fertility and wealth in the works of Anna Efimova, folk popular motifs and fairy-tale fantasies by Alexei Vorobyevsky, decorative ornament of Anna Yatskevich became an example of this. In sculpture - the theme of childhood and motherhood in the works of Sofia Velikhova and Galina Stolbova. The animal world and literary characters are represented in the plastic of Boris Vorobyov. A talented illustrator and writer Yevgeny Charushin, outstanding sculptors Vera Mukhina and Elena Yanson-Manizer, who embodied portraits of ballet dancers in china, are involved in cooperation with the plant. The revival of the technique of underglaze painting begins. At the Lomonosov Porcelain Factory intense work on new shapes of services, vases, carafes, decorative objects and souvenir articles was under way in this period. An indubitable masterpiece was the Crystal vase by the sculptor Vladimir Semionov, which won him the Grand-prix at the International Exhibition in Brussels in 1958. At the same exhibition gold medals were awarded to Serafima Yakovleva for her Tulip, Spring and Eastern service shapes, Alexey Vorobyevsky for the painted decorations of the Folk Patterns and Russian Folk Print Sets and Anna Yatskevich for her decoration of the Cobalt Net Service. The painted Cobalt Net pattern, inspired by an Elizabethan service, harmoniously emphasized the soft, lobed form of the Tulip, creating as a result a strikingly noble and classically elegant piece. This service became the factory’s brand mark and has remained its “visiting card” to this day. The traditions of Russian artistic porcelain could be sensed in works produced by a large group of artists who joined the creative team in the early 1950s, on graduation from the Mukhina Higher School of Art and Design. Attachment to these lofty artistic traditions was demonstrated by Anna Leporskaya and Vladimir Gorodetsky, eminent masters of Soviet decorative and applied art. Leporskaya had an excellent schooling in due time under Malevich and Petrov-Vodkin, and later Suetin. Her porcelain pieces are emphatically concise and clear; their proportions are impeccable and the line pattern is so expressive that it allows to regard the white, unpainted articles as fully finished works of art. In this category may be included, for instance, the emotional and plastically expressive Drop form for a service or the strictly elegant Leningrad shape with a thought-out utilitarian character of items. The latter coffee and dessert service won the Grand-prix at the Prague. Exhibition of the International Academy of Ceramics in the early 1960s.

In the late 1960s the Lomonosov Factory began to produce unusual cups made of bone china. They differed from common, hard porcelain not only by their elegance, lightness and translucency, but also by a warm, soft colour of the body, by a very thin layer of glaze and that feeling of airiness, which was characteristic of the celebrated Chinese “egg-shell” kind of porcelain, also called “bodiless ware”. In addition these bone china articles, when thumped slightly, resounded with a pleasant bell-like tone. The development of bone china demanded to change literally the entire technological process, starting from the preparation of slip (liquid paste for moulding) and ending with firing. Together with clay, kaolin, feldspar and quartz, the composition of the paste also included preliminarily fired bone powder, which resulted in the production of a snow-white “stem”. This piece of porcelain was glazed by means of a sprayer laying a very thin coat of glazing. The properties of the new material were fully appreciated by the leading sculptors Eduard Krimmer, Anna Leporskaya and Vladimir Semionov. The new shapes of cups and services created by them invariably emphasized such qualities of porcelain as delicacy, translucency and whiteness, while preserving the overall classical commensurability of proportions and a clear-cut, pure linear design of articles. All these specific features were revealed in Nina Slavina’s majestic White Flower set resembling by its forms blossoming bluebells with emphatically bent wavy edges of the pieces. This work, together with Slavina’s other articles, was awarded a silver medal of the USSR Academy of Arts and is now in the collection of the Museum of Decorative and Applied Arts of Russia and in the State Hermitage.